A Beautiful Canopied Alcove is Destroyed: Then and Now 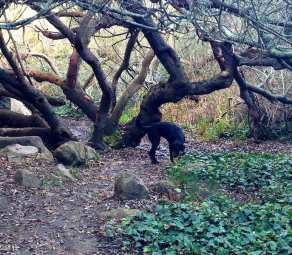 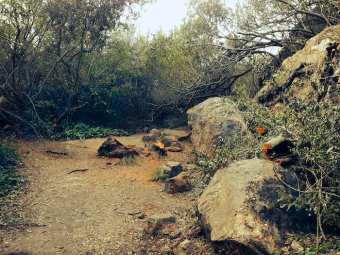 Everyone we know is deeply upset at the continued defoliation of our park — especially the previously untouched wilderness areas. Here, one of our kids’ primary climbing trees has been removed. The trees in this alcove were not hazardous — they were a part of a network of trees along a trail that was unique. The gnarled and twisted trees added character, charm and sparkle to the park — they were part of a magical trail in a forest right in the center of San Francisco. It’s gone. Why?

The “log over the creek” along this trail is also going to be replaced with a boardwalk. At the planning meetings, everyone wanted the old fashioned log retained. It was so “Tom Sawyer”. How special that this park had this special place so unique to a city park.  At the planning meetings hadn’t we decided it could be simply widened by about a foot?

Why are we allowing Park and Rec to do this to our park? No one we’ve spoken to wants these extensive capital changes except for the people doing the work — of course they are getting paid or it.  But all we wanted was the trails fixed, not widened and altered with bigger and more stairs , and we wanted the existing trees and landscape retained.

300 more trees will be coming out. But it’s not just the trails and the trees which are being altered and removed. It’s also the underbrush and thickets that have always made this park into the natural wilderness that we all love — it serves as a habitat for our very special animal population. But the growth is more and more sparse these days with more and more growth removal, and what is left is bare dirt and sparse grasses. How can a handful of “nativists” have gained control of the plan for the park. Why aren’t the rest of us included in the plan?

This entry was posted in General. Bookmark the permalink.

1 Response to A Beautiful Canopied Alcove is Destroyed: Then and Now