Edited to Add: The appeal described below was ruled “untimely.” This left the possibility of legal action by the environmental group WiserParks (formerly known as ForestForestForever), which they decided not to pursue for practical reasons.

Environmental group ForestForestForever has submitted an appeal to the Board of Supervisors requesting that the City re-examine their environmental compliance for the Glen Canyon Park Renovation Project. The project had been scheduled to start in October 2012 with the felling of nearly 60 trees, a prelude to the destruction of hundreds of others. 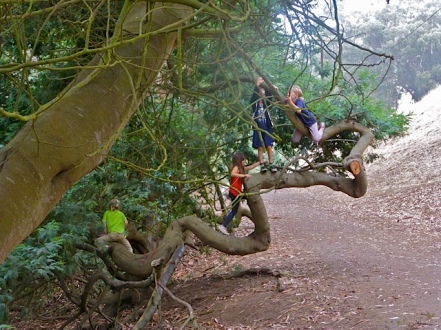 This tree is to be felled

As SFForest noted in its post, Under the Radar, when the San Francisco Recreation and Parks Department filed for an exemption under the California Environmental Quality Act (CEQA), it said that none of the proposed work would be in the “Natural Areas” of the Park. This enabled it to get a permit to go ahead with the project without doing an Environmental Impact Review (EIR).

CLICK HERE to read that article: Natural Areas Program Under the Radar in Glen Canyon

As the map clearly shows, a substantial portion of the contract area is in fact in the Natural Areas. What is proposed for that area  – the removal of trees and replanting with native plants – is exactly what the Natural Areas Program wants done. (SFRPD claims it will plant 163 trees. Two problems: Half of them are actually bushes and shrubs, not trees; and actually only 113 “trees” are in the contract.)  CLICK HERE to read what they say they’ll do: A New Planting Plan for Glen Canyon.

IT’S NOT JUST A MINOR ERROR

Besides the issue of SFRPD making erroneous statements,  there’s a more important matter at stake. An Environmental Impact Review would need to review all the actions planned for the area, cumulatively. This would mean that SFRPD couldn’t split up the projects, minimizing the impact of each one, as it has been doing. Even if the individual impacts are not huge, cumulatively they will change the Canyon drastically.

From ForestForestForever’s press release (slightly edited): “According to environmental regulations, changes in the same area must be reviewed cumulatively. All the Canyon plans and assessments call for cutting down hundreds of trees in the Canyon – plus Rec & Park has plans to cut down thousands more trees in nearby city parks such as Mt Davidson. Along with allowing one to escape from city living, trees are home to forest wildlife and absorb air pollutants, sequester carbon, and release oxygen and are the “lungs” of the city.”

BOARD OF APPEALS “HAMSTRUNG” – ONWARD TO THE SUPERVISORS

The spokesman noted that they “made the decision to take this action after the matter had gone before the San Francisco Board of Appeals, and was rejected. At the November 14th 2012 Board of Appeals hearing, the Board President, Chris Hwang, expressed serious concerns about this ‘flawed public process,’ and added that she felt that because the Board of Supervisors had exclusive jurisdiction over environmental review issues, it had ‘hamstrung’ the Board of Appeal’s ability to choose a different course.”

ForestForestForever  also noted that it was surprising that the City tried to bypass “bedrock environmental regulations and the local guidelines that are required of ordinary citizens and businesses.”