Honks and Thumbs Ups At the Glen Canyon Trees Protest

Thank you to everyone who came out to Elk and Bosworth for the protest, despite the rain and the vice-presidential debate. And for those who missed it – it was amazing. Here’s a first-person account:

I’d been told to expect  12-15 people, enough to carry visible signs at the narrow intersection without blocking traffic. That’s what they told the police, who would send a patrol car to drive by and make sure we weren’t getting in trouble.

In fact, when I trudged up the steep slope of Elk, a few minutes late, I counted over 30 people there already.  The organizers had promised not to block the sidewalk, so the group spread out and stood on each of the corners of the intersection.

It was a small forest of handmade signs: 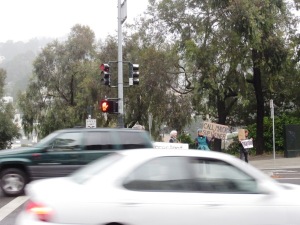 The lights cycled through red, amber and green,  and traffic streamed past. A bus moved slowly by, and all the passengers waved and gave us thumbs-ups. Cars honked their support, and we waved back.  Each time the lights changed, in each direction, there was a symphony of honks.

“Each honk is a vote,” joked one of the protesters. The mood was jubilant. We had a lot of support.

Even earlier, as I parked, and wrestled my sign out of my car, someone saw me from her house, smiled and gave me a thumbs-up.

Another neighbor came out and called to us. “Come here,” she said, standing out of the rain. “Explain this to me. What is all this about? Cutting down trees? Sixty? Are they mad?”

A passer-by asked for a flyer.  Fortunately, someone had carried a few to the protest. Several people noted the URLs of the two sites GlenCanyon.net and SFForest.net,  and said they’d go there for more information.

Eventually, it was 6.30 p.m., and dusk was falling together with the rain. One last set of beeps from passing cars, and I helped to take down the signs. It was time to go.

A lot of people had seen the signs. Some already knew about the problem. Maybe others would be inspired to go to the websites. Were we in time to save the trees? We don’t know. But if they aren’t saved, they will be remembered.