When the First Glen Canyon Bee Hive was Killed – November 2011

This article is from SaveSutro (republished with permission), about the destruction of the first feral bee hive in October 2011.

This was going to be a post about the San Francisco Natural Areas Program (SF NAP) destroying a hive of feral honeybees in Glen Canyon Park. It still is, but with less anger.

In a tree behind the rec center, about 9 or 10 feet off the ground, a nest of feral honey bees had made their home. It was one of three in Glen Canyon Park, and it was thriving. Here’s what it looked like in April 2011: 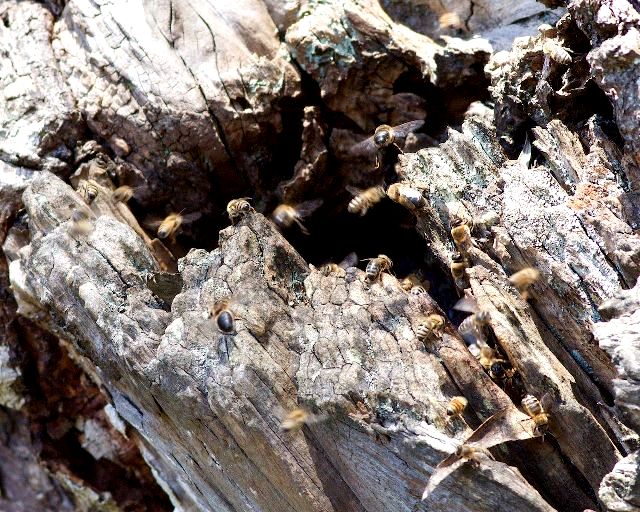 Here’s what it looked like after it was destroyed on 15 October 2011. Said the person who sent in the picture, “Note the sad hapless bee trying to get into her hive…” 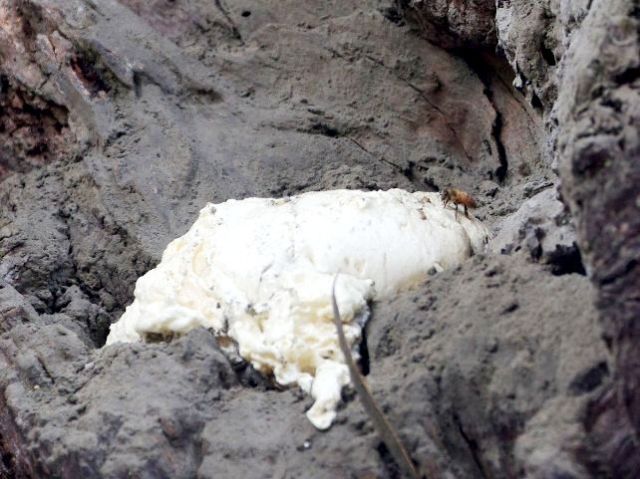 This nest had been there for a long time, and bee-lovers had been watching it. It was registered with the Feral Bee project.

People were furious. “I have a ladder and drill, who would like to climb it tonight to drill out the foam?” someone posted. (Of course it wasn’t going to work that easily; the colony had likely been poisoned first. The pesticides SF NAP usually uses in these cases is a mix of phenothrin and D-trans Allethrin.)

What happened? everyone wanted to know.

Someone spoke to a Rec and Parks employee about it. He said they were hornets or wasps. He expected the stragglers like the bee up there would find a home elsewhere. He gave no assurances about saving other hives.

There was an immediate positive response. Lisa Wayne, Manager of the SF NAP, wrote back to say,

“I am dismayed to hear that a bee hive may have been destroyed in Glen Canyon.  For several years, there have been at least two bee hives in eucalyptus trees in the Canyon.  Many years ago, RPD installed a fence around the one near Silvertree as a way to keep the children and other park patrons away from it and to protect the colony.  I am a beekeeper myself as well as allergic to yellow jackets and wasps and fully understand the difference between these species and docile nature of honey bees.  We do control yellow jackets and wasps in areas near trails and other public facilities.  I am not in favor of, and I don’t believe our Department is in favor of, eradicating honey bee hives.”

That was a good start. Even better, she followed up by actually investigating the incident with the concerned people in her department.

The person who sealed the nest explained what happened. He’d received information that a park visitor had been stung. He contacted her, and she said she had been stung while helping someone else who’d been stung several times. When the Parks employee checked it out, he found the insects flying angrily around the nest.

“The nest appeared to be aggressive and moving like hornets at the time of this inspection.  After speaking with the park gardener, the distraught park patron, and performing a site inspection, with the information at hand I made a decision to take action to treat and seal the nest.”

At dawn the next morning, he poisoned the nest with an “Eco-exempt product” (from their previous records, wasps and hornet nests are treated with 499, an insect killer – the mixture referred to above), “and sealed the opening with foam sealant and cement.” Since the nest was quiet so early in the morning, he didn’t realize they were honeybees.

He was unpleasantly surprised when he was informed that they were.

“It is not my practice to exterminate or discourage honeybees or other pollinators including wasp and hornets unless they pose a threat to public health and safety.  In this case the persons who where stung felt their safety was in jeopardy.  I did an inspection of the area, getting as close as I could without putting my safety in danger.  It seems that regretfully these were feral bees.  In hindsight and with better information I would have slowed the process down.  In the future if it is not a cut-and-dry wasp nest treatment, I will take more time in the evaluation process.”

He concluded,  “I am disappointed by the results of the incident and will review how I may handle this type of situation in the future…”

In her note on the subject, Lisa Wayne said,

“As the Manager that oversees the IPM [Integrated Pest Management] Division, I am taking corrective action to reduce the potential of future incidents such as this.  Please be assured that it is not the policy of SFRPD to eradicate honey bee hives; by contrast it is our policy to protect feral hives in situ as much as possible.  If a hive is located in a place where it is perceived to be a health and safety hazard, we will take measures such as signage and fencing first before trying to move the hive.  Our IPM  unit has in the past coordinated with local bee keepers to move hives where access to the queen is possible.  We will continue to take this approach. ”

For those who watched this nest regularly, its loss is keenly felt, and they regret that SF NAP didn’t spot it sooner and fence it off as they have done with other feral bee colonies in the Park. As the person who sent us this noted, “walking by that tree is always a sad reminder of the hive.”

Still, it’s reassuring to know that the destruction was accidental and that SF NAP is taking steps to prevent a recurrence. This may help to preserve the other nests we know are in Glen Canyon.

We hope SF NAP will be as considerate of other birds and animals whose habitat is being destroyed in Natural Areas with the cutting down and poisoning of thickets and trees. 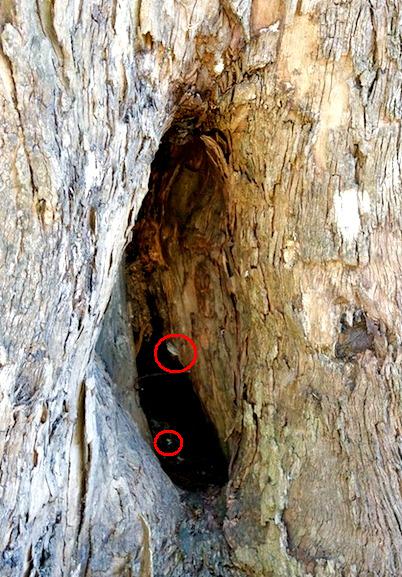 Another nest of feral bees