Despite the concerns about tree-felling voiced at the 7 January 2013 meeting, the actual felling of trees started on Jan 10 with the line of century-old eucalyptus near the Elk entrance. The reports are HERE and HERE, including photographs and links to video. Go here for a video update six  months into the Glen Canyon Park Demolition.

This video at nine months shows the devastation around the Rec Center. All the gnarly acacia trees – including the children’s climbing tree – are gone.

The Trails project (cutting down 31 trees) started in September 2013. HERE is an example of what’s happening there.

UPDATE:  Over 100 trees are gone. Staircases have been embedded all over the hillside. But at least the Great Horned Owls, which didn’t breed there for two years, are back. Photographs HERE.

Major changes are coming to Glen Canyon Park, funded by San Francisco’s 2008 Parks Bond. Many of these are necessary improvements, such as safe and accessible restrooms. But these changes will cost the canyon between 300 and 500 trees, and alter its wild land character forever.  The tree-felling started on January 10th 2013, with the line of century-old eucalyptus trees at the Elk Street entrance to the Park.

[Edited to summarize the earlier information: An appeal filed by a neighbor suspended activity until a hearing before the Board of Appeals; which was denied. The denial was appealed, but then the appeal was withdrawn because another organization filed  a separate appeal to the Board of Supervisors, under the California Environmental Quality Act (CEQA). That appeal was ruled Untimely, leaving legal action as the only other possibility.  The appellant decided against pursuing legal action, leaving the way open to SFRPD to continue.]

In reality, almost none of the trees slated for removal in Glen Canyon has been evaluated as hazardous. In fact, money is being wasted on healthy trees that pose no threat and most people enjoy their sheer size and beauty.
We recently discovered that the Rec Center Capital Project bid packet includes specifications to remove almost all trees around and behind the Rec Center, even though most have nothing to do with relocating the tennis courts.

San Francisco Forest Alliance is asking SF Recreations and Parks Department to modify the plans and save the trees. 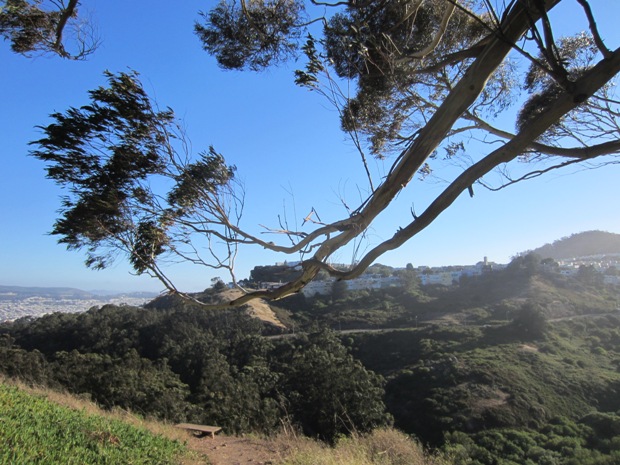 A PATTERN OF DESTRUCTION

There is a disturbing pattern wherein the historic Glen Canyon forest, like other city park forests, are being continually laid bare, bit by bit, in one project after another. For Glen Canyon, this is what we’ve seen and expect in the future:

In addition, there are reports of trees cut before 2012 (including evidence such as stumps) of around 100 trees.

Rec & Park has hired a contractor to begin the relocation of tennis courts and renovation of the playground, ball park and rec center. This will immediately involve cutting 58 trees.

Over the past year, Rec & Park and their consultant have given numerous public presentations about the “hazardous” tree assessment funded by the 2008 Parks Bond (which we support).

Through the process of the community meetings, neighbors were assured that only 10-11 trees would be cut down. This is the entire stand of eucalyptus in the picture below. The objective was to relocate the tennis courts to make way for a grand new entrance.

We are seeing a distressing pattern of communication about projects in San Francisco. Although preserving trees is extremely important to the public, they are seldom informed of how may trees the project will actually cost until it’s about to bid out – or later.

In the case of Glen Canyon,on 28 June 2012 – after the community input phase was over – Dennis Kern said that a total of 101 trees would be removed: 69 for the Recreation Center Project, and an additional 32 for the trails project.  At the August 16th Parks Commission hearing, he said that 70 trees would be cut down: 10 because they were in the way of the project, 60 because they were “hazardous.” But… were they?

A CONTRACT OUT ON THESE TREES

We obtained, under the Sunshine Act, an evaluation made by SF RPD’s hired arborist, Hort Science. We mapped the trees in the bid contract papers to the Hort Science report. How many trees in the 70 were hazardous?

Another ten – the trees in the picture above – were being felled because they were impacted by the project. Around 14 were dead or dying (but not considered hazardous – and dead trees are important for wildlife, including one of Glen Canyon’s natural bee-hives).

The remainder were being removed because of “poor suitability” – a grab-bag of reasons including being too big, of the wrong species, or “invasive.”

(Click HERE for the details of the Hort Science report.)

In this Rec Center project map, we have  attempted  to consolidate the Bid document map with the arborist’s report to show how many trees are actually being removed and the reasons why — which have very little to do with safety.

WHAT YOU CAN DO

1) Write or email the Parks Commission through the Secretary to Park Commissioners, Margaret McArthur.

2) Write to Supervisor Scott Wiener. (Glen Canyon is in his District 8.)

4)  Write to Dawn Kamalanathan and Karen Mauney-Brodek of the SFRPD’s Capital & Planning Division regarding the trees to be felled for the Capital projects (recreation areas, trails).

Clicking on the button below will take you to the petition. Please read it and sign it!

[Edited to Add:  Confusingly, there are two nearly-identical petitions out there – we had an administrative glitch. One had over 2,000 signatures as of 6 October 2012, the other over 650. This link is to the one with the smaller number.]